Everybody loves it when their garden is a success!  But, not everyone knows what to do with all the fruits of their labor.  This year, Johnny and Caleb truly did most of the work in the garden.  From planting, to watering, to picking.  At least until the end of the season when Johnny started getting a little busy.  I stepped in a few times to water and pick veggies that just had to be picked.  So, honestly, the success this year is much attributed to the hard work of the guys.

This is our 3rd year to have a family garden.  I would have to say in some ways it was our most successful.  Other than the caterpillars who decided early on to literally destroy the beets, peas, and lettuce.   They tried to take out the onions, but the end result of those was to at least have some green onion and chives for the freezer. 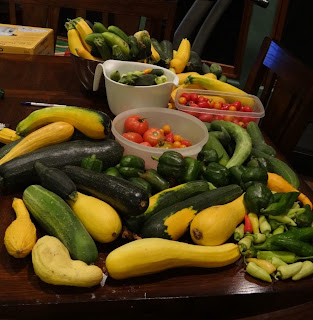 We shared A LOT of veggies with family and neighbors.  And when it came down to it, we still had all of this to figure out what to do with!  This is 1/2 of my kitchen table folks!  I'm certain if we'd not shared, my table would have been full. 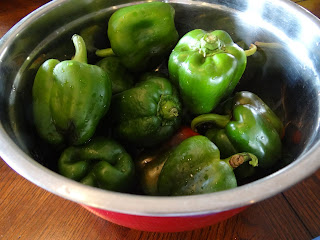 Memorial Day came around and as much as we'd have rather gone to the movies or, well, basically, anywhere, we decided to stay home and attack the veggies in order to preserve as much as we could.  I hate waste and I was determined I would do my best to prevent that this year.  So, here was a bucket of bell peppers. 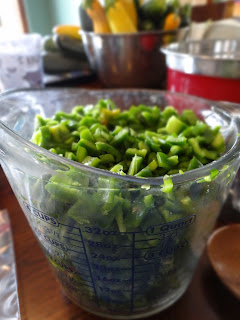 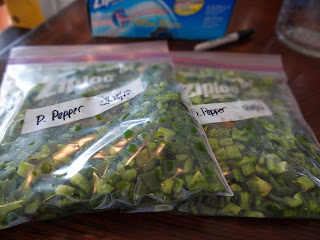 And bagged!  Love it!  We don't use a lot of bell pepper, but when we do, all I have to do now is pull out a bag and break off a clump.  Why did I start with the bell pepper?  Because there were only a few of them and I knew they would be done quickly. 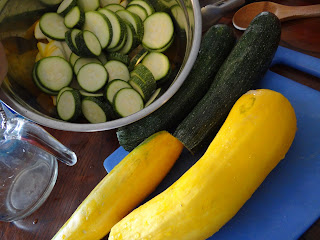 The squash on the other hand was a completely different story.  We had tons of squash.  I tried to count them, but lost count.  What I did count was the number of cups we cut up and bagged for the freezer.  107 cups of squash in all. Yikes! 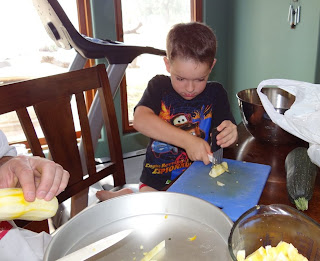 I had the best help ever.  Caleb and Johnny.  I found in my kitchen drawer this neat tool I had bought from a Pampered Chef party one time.  I was a nervous wreck as Caleb wanted to help CUT VEGGIES.  In my mind I wanted to just send him outside to play, but in reality, I knew that wouldn't work.  He would feel left out and I would be knocking him out of his big-boy status real quick.  So, hence the tool he is using.  It holds the squash in place and he can cut between the tines!  Incredible tool and made my job of watching him with the knife much easier.  Whew... 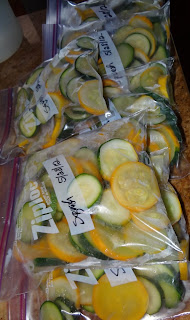 I blanched the squash for a couple of short minutes before cooling and bagging.  Everywhere I read said it was best to blanch them as it completely stops the growth.  My only hope is that they will still be tasty when we defrost and eat them.  But, some attempt at preservation was better than none and watching all this go to waste.  Well, I'm sure I could have shared and given most of it away.  But, I like having lots of bags of frozen veggies in my freezer. 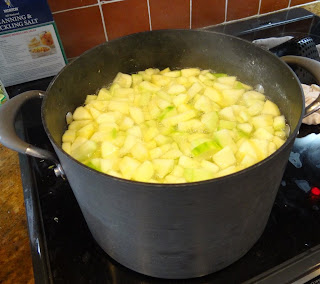 The rest of the squash we cut up in small chunks.  One of Johnny's favorite meals (and now mine), is Calabasa with chicken.  Okay so that name is probably half hispanic/half white.  But, basically it's chicken with squash.  The squash "melts" down until it's as soft as soft can be.  With the right seasonings, totally yummy! 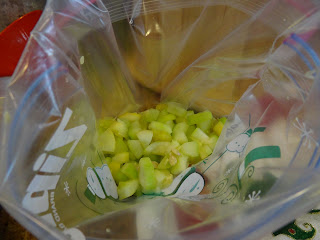 Here I was bagging it up in gallon sized freezer bags.  It takes a ton of cut up squash to make a medium casserole size of the meal.  So, in my guessing, I figured a gallon sized bag would be about a meal, plus a day or two of leftovers. 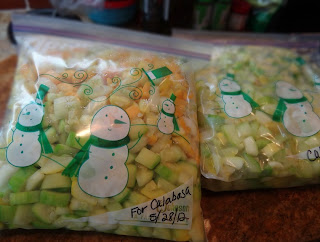 I think I ended up with 4-5 gallon bags.  So, pleased with that.  I know Johnny was hoping for more, but we shared a lot of veggies and it felt good to share with others. 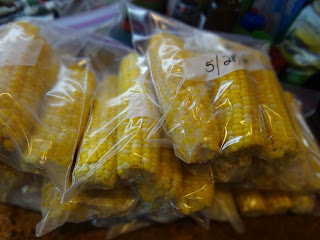 We did not grow corn this year. But my wonderful brother and sister-in-law shared their bounty with us.  We ended up with about 6 or 7 meals in the freezer.  Since Caleb likes corn, that was a blessing to have some for him. 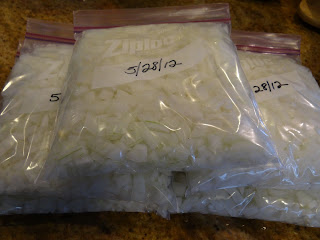 And last but not least, onions.  The onions pictured here in this photo we did not grow.  Johnny was given a large bag of onions from the Valley.  They were the sweetest onions I think I'd ever received.  Honestly,  I cut up enough onions to FILL 5 quart sized freezer bags and did not shed ONE tear.  I mean it.  I had set myself up for crying and burning eyes.  But no.  Not one tear.  It was awesome!

It took us a full day to work through all these veggies, cutting, blanching, bagging, etc.  I own a food processor.  But, don't laugh at me -- I cannot seem to figure out how to use it to just dice up the veggies in small chunks.  The first batch of bell peppers I did I used my food processor and honestly, if babies ate bell peppers, the texture would have been nearly perfect for them.  It was almost like a soup.  I even changed blades and tried again. Still no success.  So, my goal between now and the next garden is to read the book and figure out which blade will give me the cut I want.  All the while we were cutting I kept telling myself, there has to be a better way.  I'll get it figured out.  Truthfully, it was fun.  By the end of the day my body was aching and my tennis elbow was talking to me.  But, the "fun" was in knowing that we did better than last year and preserved the fruits of our labor to enjoy throughout the next few months until we run out.

I still have the cucumbers and tomatoes to mess with.  My goal is to make a GREAT salsa and Ranchero Sauce for Johnny.  One of these days I'll get that figured out, too.