What is the chance that three women, two of which traveled together, and the third who happened to be in the same place at the same time as the first two women, would find each other at a WOF Conference weekend?  There are so many women there.  Woman, after woman, after woman...The chance seems pretty small, but in reality it did happen.

Remember from my previous post that going into this years' WOF I wasn't as, um, excited as I had been before?  Well, I had already made a few jokes about "quitting" as group leader for next year before this weekends' event.  But then, as I sat next to my new friend, Jody....I listened to her excitement and heard her say several times, "....next year....".  That excitement was contagious.  It reminds me of Women of Faith a few years ago when the theme WAS "Contagious Joy."

Jody encouraged me to attend a Group Leader meeting with her.  She insisted on several occasions, "we can do this!"  So we went.  And who did we meet?  A lady from our small town, from a nearby church, Carol M.  She was there as well, wanting to get some tickets for Women of Faith 2012, but feeling hesitant at the same time as this is a big commitment.  And unless you remember that God is in control, you can quickly find yourself overwhelmed with the process.

We decided together we could do this. We could bring to WOF in San Antonio 2012, at least 25 women.  We exchanged phone numbers and email addresses in order to keep in touch.

What a God-Moment.  First, Jody to lift me up and bring back the excitement I knew I had, then to meet Carol, who was unsure about doing this group leader thing on her own.  Together, we're a team, and I can't wait to see the blessings that come from this. What can I say?  Leading up to this years' WOF conference I wasn't as excited as in years past.  So much had gone on prior to make life crazy.  I felt like I did such a poor job organizing this year and that had me in the "Debbie-Owner" mode before we left.  As always though, I only needed to be in the presence of what had to be 15,000 women, singing praise songs, laughing and crying for about 15 minutes when my mind shifted and I couldn't wait discover each and every blessing.

Coming with an open mind and heart is a must.  You never know in what way Jesus is going to touch you and ask you to make a change.  Here's a visual of one of the best moments from the weekend left to right; Sandi Patty, Mandesa, blonde head in back is Lisa Welchel, Marilyn Meberg, Patsy Clairmont, Amy Grant, her guitarist, and Brenda Warner, (green shirted man in the back was Amy's drummer): 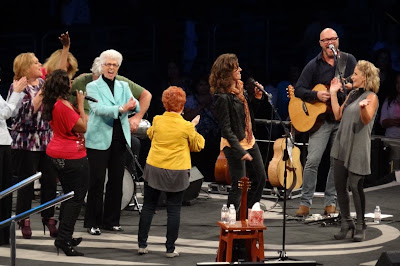 It was a blessing and a pleasure to fill in for my brother and his wife last week while they were out of town.  Their small church has a sweet ministry that is just getting going called Pack's for Pup's...I think I spoke about it recently in my blog, but in case you missed it - - backpacks are filled with easy to serve food items for children whose parents are not around on the weekends to provide for them.  Or maybe just down on their luck and can use some help.

Right now they are serving 4 kiddo's from the Elementary school.  It was 5, but one child was moving without explanation and apparently in such a rush that the backpack will not be returned.  A sad story for sure.

Here's Caleb as he helped me sort and stack food to go into the backpacks.  Notice the very excited look on his face?  Just kidding.  This is what I now call the "blog-o-phobia-pose."  Can't you just see his wheels turning?  "Mom.  Come on.  Really?  Again?" 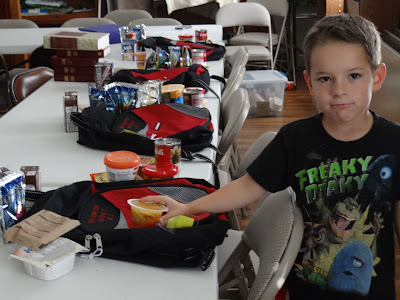 And On the Fourth Day... 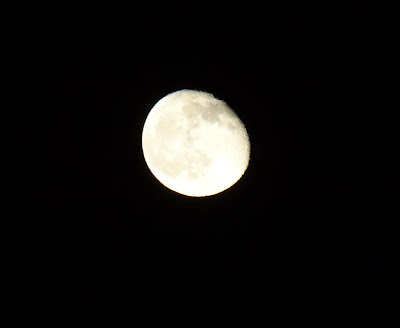 God created the sun, the moon, and the stars in the sky.

Check out this amazing picture I took on Friday night.....I wish I knew what settings I had used.  I was standing out at the end of my drive-way taking pictures.  After each picture, I'd turn the dial on my camera to another setting.   Ultimately, I have no idea what one I used to take this.  Matter-of-fact, it wasn't until I downloaded them that I saw one had actually turned out this good...I even captured a bit of what looks like a crater near the top-right of the moon.

God's creations are so wide and vast.... 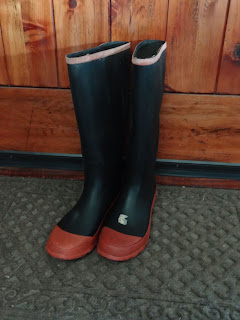 Rubber boots.  Protective coverings worn to keep the feet dry.  Lots of people own them.  What is special about these boots?  There really isn't anything special about the boots as much as the reason I had to wear them.

I don't traipse around often in these very attractive and stylish pair of boots.  (ahem, just kidding.  Even I know they are pretty ugly).  But, rubber boots are definitely for special occasions - - like, when it rains!  Yes, I actually said that.  Rain.  Whoop!  Woke up the other morning to a rain shower, resulting in - - dum, da, da, dummmmm.........wet grass!!!  We've been in a drought for a long time.  I think I heard it was ten months....I don't know but four months, six months, ten months - - it's all a long time.

God has been blessing us with snippets of rain over the last couple of weeks.  A lot of places all around us have been getting more, but God has given us a little -- one tenth here, five tenths there.  I for one am very grateful for each and every drop He sends our way.  We actually have bits of grass throughout the yard again.  Not pretty grass in the least, but it's green.  And anything that replaces the dry dessert yard we've had is a wonderful blessing.
Read more »
at 10:30 PM 0 comments

Until today, I thought these stinker cows of ours were tossing the trough over because they wanted the food that had fallen beneath it.  You know?  To get every last morsel on the ground?  While getting every last drop of food is assuredly a reason for tipping it over, these rascals have another reason for making more work for me every day.  Surprise, surprise! ..... 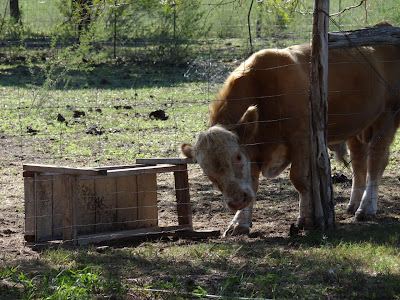 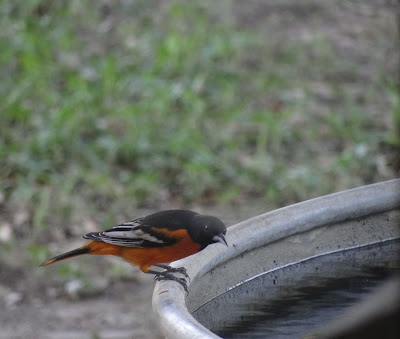 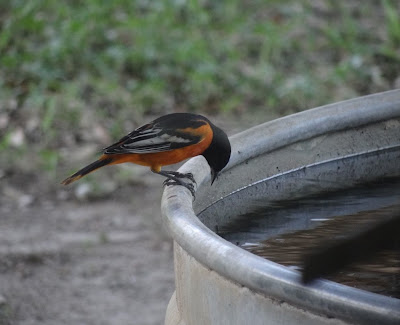 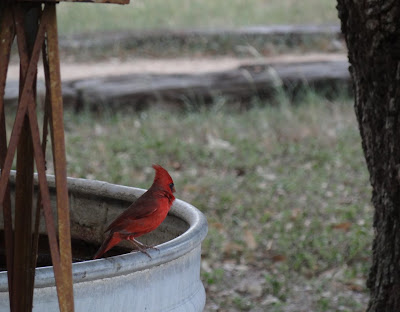 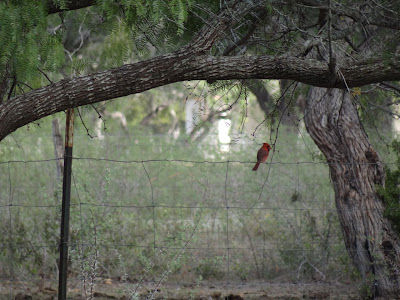 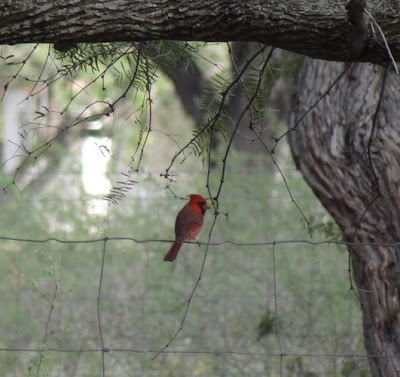 First Soccer Game of the 2011 Season

October 1st marked the first soccer game of the year!  This year Caleb's team is called the "Cyclones."  All the teams are named using weather words - Thunder, Storm, Hurricane, etc...

As it turns out, his jersey color is orange.  Ummmm, yeah, we don't buy a whole lot of orange in our house.  Anyone who knows Johnny is an A&M Graduate, knows we don't "do" orange.  But, it is what it is, and our team color is orange.

It was a fun and exciting first game.  At this level, U8, we still do not keep score. (But, those of us on the side-lines tend to do a bit of counting and we can tell you the final score was 7-3!!)

Here are a few high-lights of the first game: 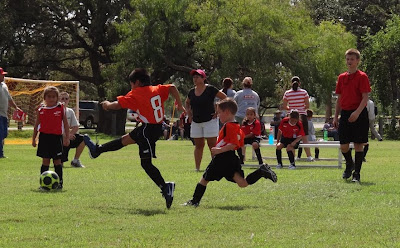 My extroverted son, Randy, loves drama.  Well, probably not drama in real life, but drama that he can create on stage.  From the first steps he took going into high school he found his way into the drama class.  Then auditioned for his first play, then second.  It's progressed from there.

This school year he snagged a few roles in the first play of the year, "Almost Maine."  This is a picture of Randy after the play was over, still in costume from his last scene.  He has red cheeks because he and his co-star were out "snowmobiling" together. 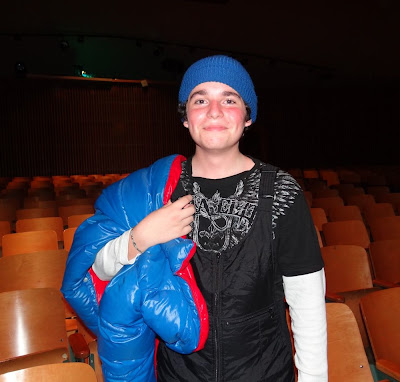 Life is really quite funny sometimes in what comes in your path from any given day to another.  I enjoy a good laugh just like the next person and a recent experience in the Parker household gave us more than a chuckle or two for sure.

Anyone who has had teenagers in recent years knows that some of the classes taken at the high school level present the student with the opportunity to take care of a "baby" for a weekend.  Now, CPS would definitely be on red alert if real babies were sent home with 15 yrs olds at any given moment.  So, it's quite good and well that there is a company out there that creates these....... 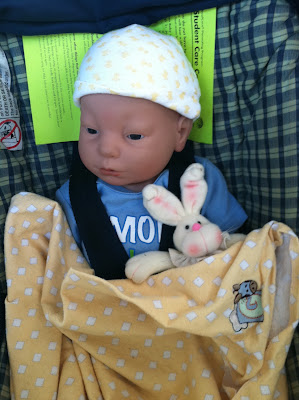 You Need This More Than I Do

How many times have you gone into the grocery store with one item in mind, only to find yourself fifteen minutes later with an armload?  Of which about half the items are trying their best to make their way to the floor because you've convinced yourself you can carry them and you're only going to grab, "one more thing."

This was me the other day as I came around the corner of the bread aisle at our local grocery.  Arms full, trying desperately not to drop anything.  Suddenly, standing before me was an angel.  One of God's angels?  Maybe, maybe not.   I'm choosing to believe that he was since he blessed me in a generous way.

This angel, who looked like he'd just gotten off work, wore a bit of grey in the hair that peeked out from around the edges of his cap.  I've no doubt he was tired from a long day at work, but he took one look at me and the load in my arms and said, "here, you need this more than I do."  He then picked up two or three items out of the grocery cart and passed the empty cart to me.