In all honestly I've always thought of Halloween as a harmless "holiday" where my kids could be silly and have fun.  It's something I've celebrated as a child and then with all my kids from the time they were itty-bitty's.  I think I have a post from last year where I was struggling with the concept.  While I still think it can be harmless,  I have gained a new perspective on the "holiday"from views shared with me by my pastor.  And I must admit that I do feel a bit of a tug at this time of year to avoid the holiday.  At the same time though, I can honestly say I have never thought about evil or worshipped evil on Halloween.


Putting all reservations aside, I tossed Caleb's costume (new and in the bag from last year), into the car.  Okay, so that's another story in and of itself.  Why did we still have a costume new and in the bag?  Short story version - Caleb has never wanted to dress up. He gets embarrassed easily and for him I guess the thought of putting on the costume means everyone will look at him.

Back to my original story.  I was going into Corpus to spend time with my son and his family.  Just in case they went trick-or-treating, I tossed last year's costume in the car.  Sure enough, they were going trick or treating and my adorable grandkids invited Caleb to come along.  I really wasn't sure how this was going to go down.  I remembered last year where he refused to wear the costume.  But, as soon as the aforementioned grandkids starting putting on their costumes, Caleb became equally as excited and wanted Woody from the car.

And here they are....aren't they all just adorable? 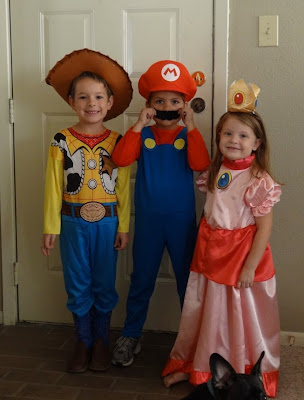 One of the first houses we stopped at.... 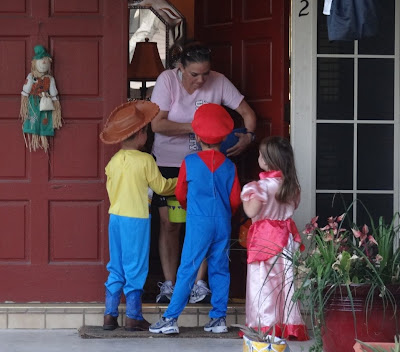 I love this picture....it looks like they are having a serious planning session.  All heads bowed down working out the details.  Or I even like to think they are having a quick word of prayer.  Maybe?  Hmmm.... 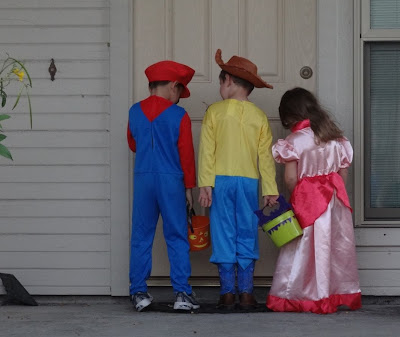 This one is quite blurry, but I had to post it.  He wanted to stand how Woody does in the movie. 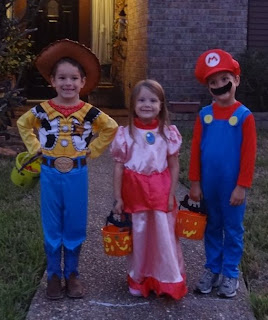 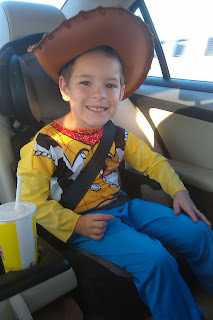 While the truth of Halloween and what it can be all about for some people regarding devil worshipping, etc.  is still a point to be considered and evaluated.  One must be certain where their heart really is at.  Halloween for me isn't about that at all and this year was especially nice.  I shared several hours with my family; my son D. and his wife M., my grandchildren H. & A., my daughter A., and my nephew and niece by marriage.  We had the very best time!!  We walked....and walked....and walked....and laughed and laughed.  I even had my first piece/bite of sushi....ummm, not sure yet, the debate is still out on that one.

What I do know is that I wasn't for one moment thinking about the blackness of what the holiday can represent.  I will cherish for a long while this time I was able to spend with my kiddo's.  Randy was missing.  He was out with friends, so we weren't quite whole....but it was close.

When the walking was over, every was hungry.  So off to eat we went at Poet's, a restaurant nearby.  I managed to capture this last, cute picture of the boys. 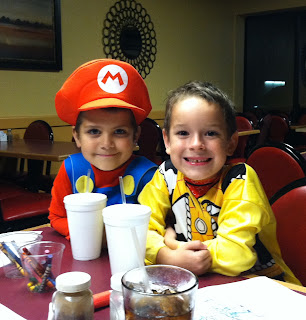 I'm sure there is still room for debate on the halloween holiday.  If I can keep my perspective and help Caleb to keep his, then I know we'll be okay.  If at any point in time I think we are losing that perspective, we will definitely regroup.  What did Caleb ask me on the way home?  Mommy, when will it be Halloween again???   I think for him the time spent with H. & A. was something he thoroughly enjoyed and the anticipation of knowing he can do it all again next year gave him happy thoughts.