Another Play - "Anatomy of Grey"

Anatomy of Grey was the name of the play that the Theater Department did at Tuloso Midway mid-November.  Randy landed a part in the play as the preacher in a small town.  This small town had people getting sick and no one knew why.  Dr. Grey shows up and does his best to treat all the patients, but people are dying and they can't figure out what's wrong.  There were definitely some funny scene's throughout the play to make you laugh, but there were also those that tugged your heart strings and yanked a few tears out of your eyes.

They performed the play three nights in a row. On closing night they had a special treat for the audience.  The entire cast sang and danced to the theme song from the new version of the Footloose movie.  It was absolutely adorable and so fun to watch.  You could see they were ALL having the best time.  I tried to catch a few photo's, but because they were dancing, well, they aren't really clear.  But, you will at least get the idea. 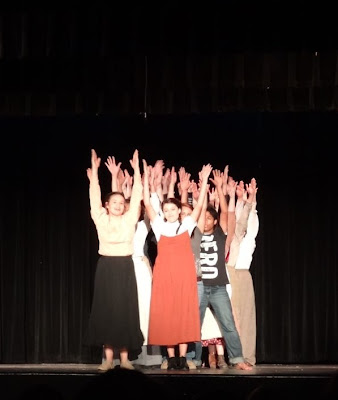 This play was probably one of my favorites.   Randy has been a part of several plays now and I suppose it's really hard to choose one favorite.  But because his part was somewhat large and had him on stage often I think I enjoyed this one more.  All the "TM Players" did exceptionally well with this play.  I sincerely look forward to the next one, which Randy believes 'might' be a Charlie Brown play.

Until next time, this proud momma is off to bed....